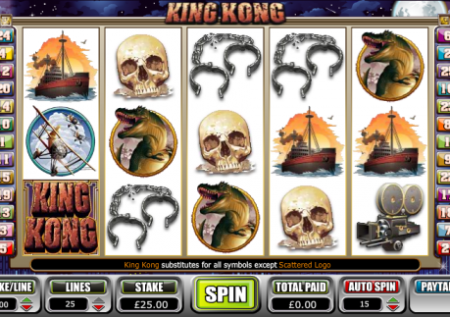 King Kong is a new slot based on the classic film, steaks range from 1p to £250 and the game has five reels and 25 lines. Find three or more scattered logo symbols and trigger one of two special feature games. King Kong goes ape is a feature awarded when King Kong appears on reel 3, all positions on reel 3 change and the feature is played.

The King Kong smash feature is triggered when three or more scattered Logos appear left to right on screen.

Choose planes for King Kong to smash and get free games for each one, keep choosing until you miss three times. You then get the choice to reject the free games and take one of three mystery prizes, the mystery prize is multiplied by the triggering bet.