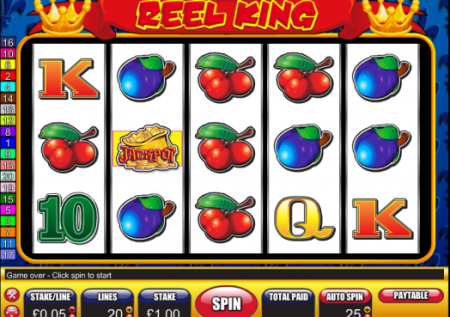 Reel King is a modern twist on tradition slot machines, with it’s clear icons, five reels and 20 win lines it’s easy to play and with the wagers ranging from 1p to £25 on each win line it is accessible to every player.

Winning is as simple as getting 3 icons in a row, there is a pay-table easily accessible by clicking on the button on screen to explain what each win is worth.

The Jester Hat symbol is wild and can substitute for any other symbol to make a winning line. In addition to this there is also the Bonus Round which will occur when at the end of a winning or losing game the Reel King character will randomly appear on one or more reels, each Reel King has it’s own special set of reels which will spend a series of wins for you!

The King remains until a losing spin occurs, at that point the Reel King will vanish and the bonus feature is over.

This extra bonus means that even though you haven’t won on a spin that doesn’t mean you won’t get a prize as the Reel King even appears on losing spins! As the amount you choose to play per line varies the prizes available vary as well, the pay-table lists prizes as multiples of the stake amount.

So if you win a prize that is 3x for a player using 1p per line that would result in a prize of 3p but if the player is using £25 per line then it’s a win of £75 for the same prize. Also, as is possible on most slots, there is an auto-play option available.

This means that once you select your play amount and hit auto-play then the reels will spin automatically without any input from you until such point where something in the game requires the player’s interaction, all prizes won are simply added to the play account.

This feature is entirely optional and can be stopped at any time by simply pressing the STOP button.